How to Create a Realistic Fantasy World (With Map Pictures)

Have you ever struggled to create a fantasy world that is not only new and exciting but feels real? Well, if you have, then this article should help with that.

Every fantasy world is different. Some are very similar to earth with a few minor changes, and others are completely different and have almost no similarities. For my worlds, I like to meet somewhere in the middle: relatively similar to earth, but with some new creatures, land formations, and cultures. A lot of people make their worlds like earth in the medieval period: countries ruled by monarchies, lots of wars, and no fancy technology. It all depends on where your world is on the like-earth to not-like-earth scale. How different do you want your world to be? If you make your world too exotic, then your readers may not be able to relate to your story; but if you make your world too similar to earth, then your readers will wonder how original your story actually is.

So what will your world be like? How do you determine how much of earth and how much fantasy to put in? Just follow these steps.

Part One: The Map

The first step to creating your fantasy world is, of course, creating a map. Every world needs a map. Even if you’re not very good at creating maps or don’t know how you still need to have a map in your mind. But it’s usually better to have one on paper so that you can reference it.

The first step to creating a map is drawing continents. This is fairly easy since all you really have to do is make a shape out of some squiggly lines. Just add some lakes and rivers and you’re good to go. 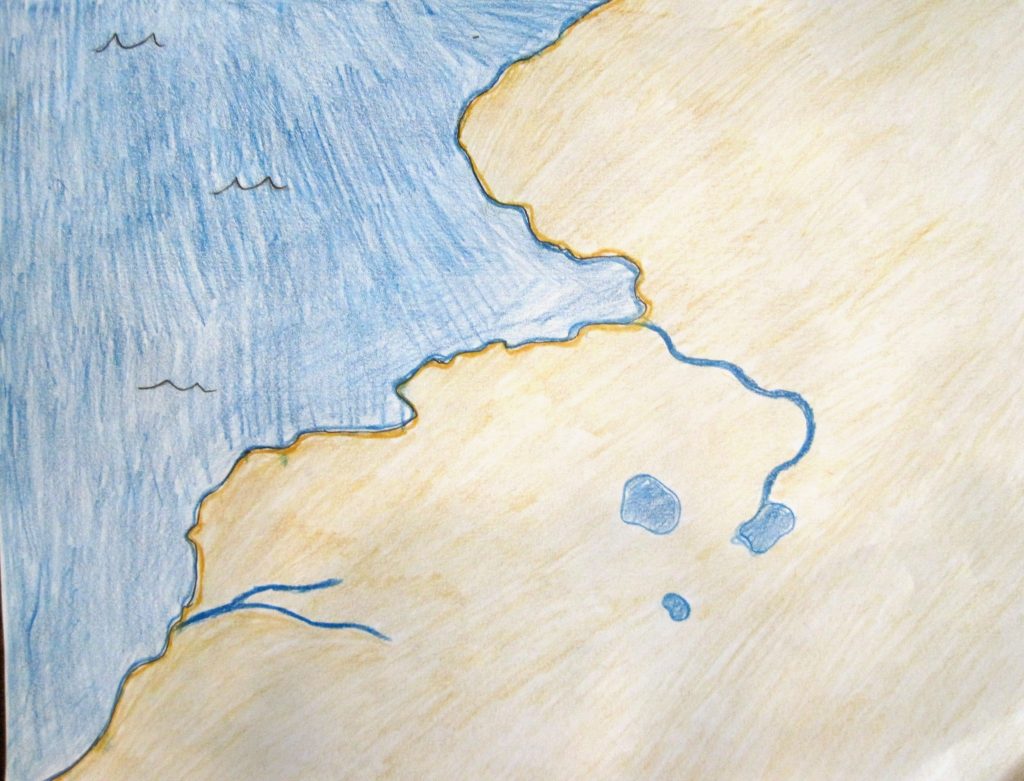 Next add some forests, mountains, and deserts to your map. You don’t need to name all of them, but you do need to draw them. 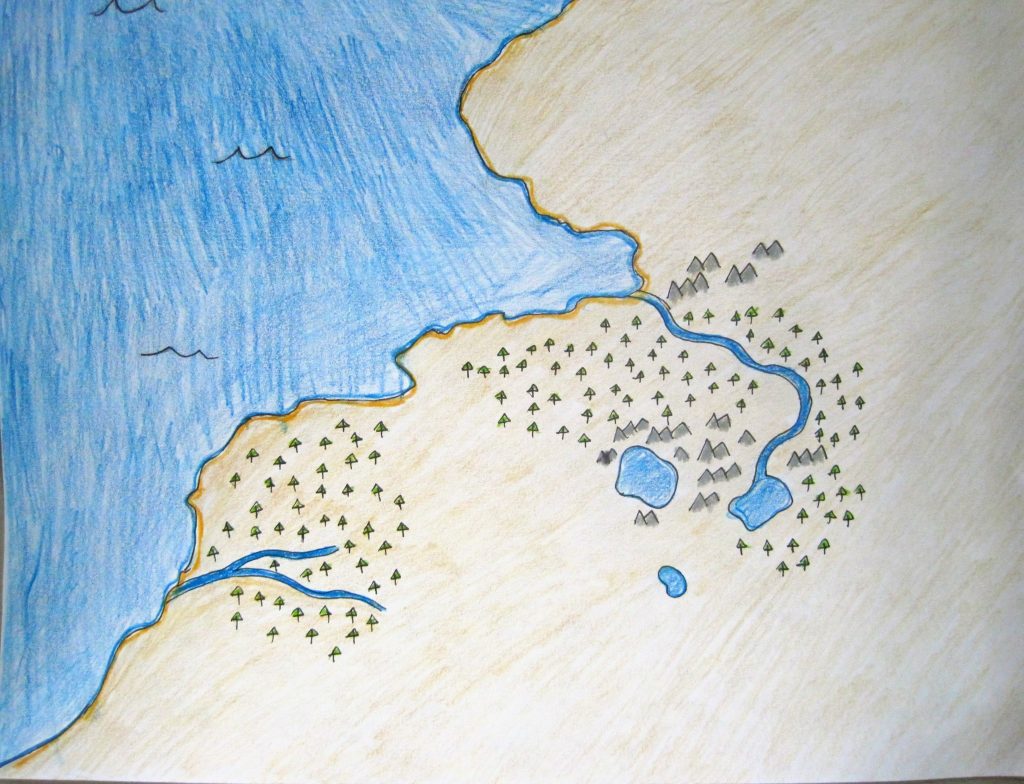 After you create your forests and mountains, start making countries. This is fairly easy; just draw some lines for the borders of your countries and name them. In my map, I named my countries Willnor, Dwarlin, and Anyura. When I think of names, I kind of just play around with words in my head until I find one that sounds good, but you could also do some online research to think of kingdom names. 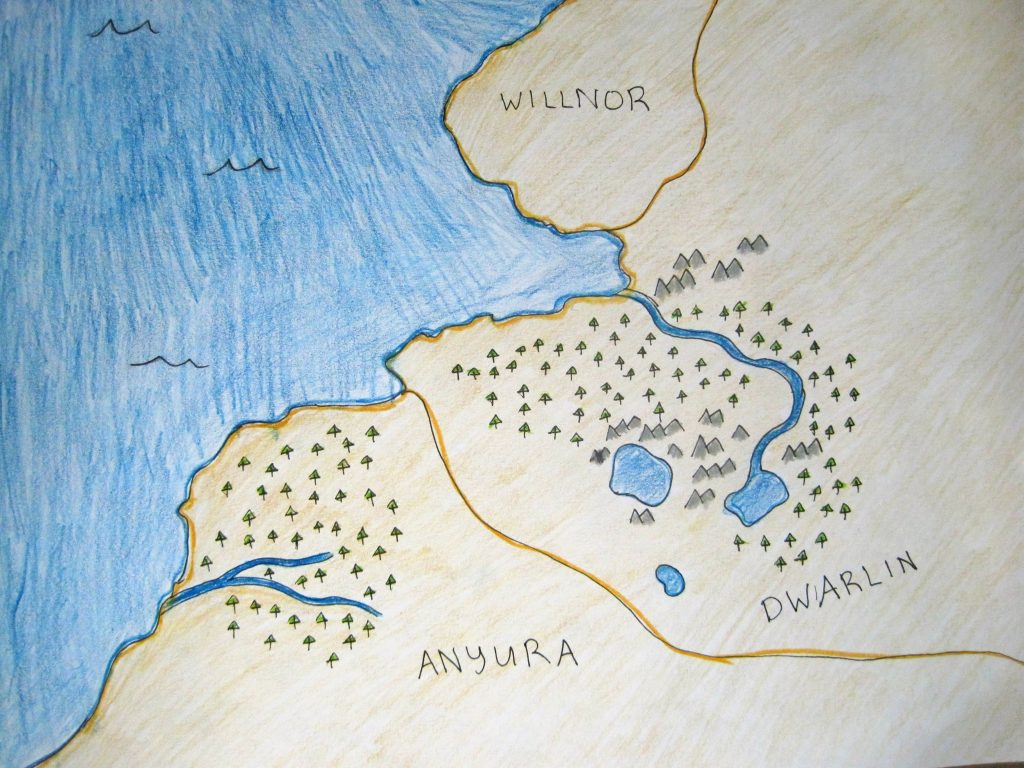 As soon as you name your countries, you’ll need to name and locate cities on your map. I use the same technique for city names that I use for kingdom names: play around with letters until I make a word that sounds good.

You will for sure want to add some cities that are near an ocean or body of water for ports, and maybe add a few cities inland too. Also, make sure you add a capital city for each country. 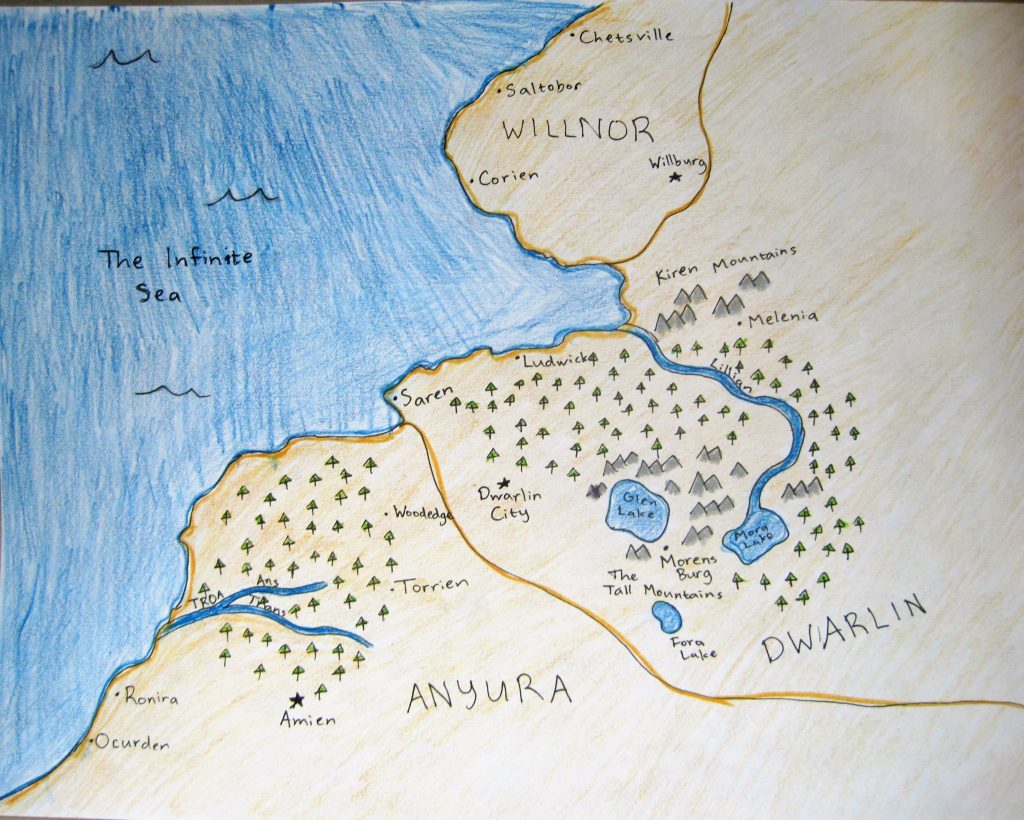 The next part to creating your fantasy world is making up creatures. Pretty much all you have to do is make things up. It’s that easy.

Step One: Making Things UP

Most fantasy worlds have humans in them, even if the main character isn’t a human. A lot of fantasy worlds also have trolls, dwarves, elves, unicorns, etc. You can use these races that others have already created, or you can make up your won. Here is a list of creatures that you can use in your world:

You can (and should) also make up your own creatures and races. Most creatures in other worlds are based on creatures on earth. For example, in The Wingfeather Saga by Andrew Peterson, there are toothy cows, which are just like normal cows except they have sharp teeth and like to attack humans. So just make up creatures, or even add some creatures that are already on earth, like horses or dogs. Also, make sure you think about the habits of each creature while also thinking of what they look like. What do they eat? Where do they live? Are they friendly? Now just have fun creating your own animals and races.

The next thing you need to do to make your fantasy world is to create new creatures and races within the world. You can, of course, make these races and creatures similar to those on earth. For example, the country of Willnor could be like Arabia; people riding on camels (or camel-like creatures), wearing turbans, and desert sand everywhere. Of course, in order for your readers to be able to relate to your story (which is, in fact, very important), you will need to have some similarities to earth.

First, you must determine what the cultures of the different people of your world will be. For example, the country of Anyura could have a British-like culture. There could be a monarchy system, and the people could be white-skinned and more sophisticated.

Think about the different religious beliefs of each country, if any at all. Even if you don’t include hardly any religion in your actual book, it is still good to think about what some of your fictional peoples may believe.

It is good to determine the overall appearance of the people in each country. What is their color of skin? Manner of clothing? Body shape? Some of these things can be decided by thinking about the kind of environment in each country. If the country of Willnor is desert-like, then the people there would probably be more dark-skinned.

What do your people like to do for fun? What kind of games do they play? What kind of bad or good habits do they usually have? All these things are necessary to decide for your fantasy world. You don’t need to determine the habits of every single person in the country, of course. You only need to think about the general habits of the whole population.

Think about what kinds of food people in each country eat. Do they eat lots of meat? Lots of berries? What kinds of things do they typically grow?

Now decide what kind of language the peoples of your world will speak and what kind of accent they will have. Again, you can partly copy the languages and accents of earth. For example, the people of Anyura (Anyurans) could have a similar-to-Scottish accent. A lot of worlds also have one common language that almost everyone in the world can speak, so it makes it easier for readers to understand.

Next, decide what kind of government each country will have. Are there kings? Presidents? Emperors? Are there rulers over each city? What is each ruler like?

What other kinds of things make up your countries’ cultures? What kinds of schools do they have? What is their national symbol/flag? What kind of history does each country have, and how does that affect their culture? (We will be making up histories in part four).

History is one of the most important parts of world-building. It affects everything from your geographical map to the main character of your story. There aren’t that many steps to creating your world’s history, and it can be as simple as making up events. But it can also be hard because you have to work within the boundaries of each country’s culture and anything else you know about your world.

Step One: The Beginning and OnWard

All you need to do for this step is think about your world’s history starting at the beginning of your world and working your way up to the time when your story starts. It’s as simple as that. 🙂

The next question you have to ask yourself is what the people of your world use to measure time. Do they use months? How many months are in a year (or other year-like measurement)? How many days are in each month? What are your months called?

Once you have a lot of the important events of your world in your head, you would make a timeline for those events. Of course, this is completely optional, but I’ve found that making a timeline helps me personally remember my world’s history, and it also helps me to see what events line up with each other.

Now it’s time to wrap up your world. Add a few finishing touches, then you’re done!

Step ONe: Naming YOur World

Not all worlds have names, but some do. It’s a good idea to create a name for your world, like C.S. Lewis’ Narnia, or J.R.R. Tolkien’s Middle Earth. World naming can take time. For me, I do it the same way I name my cities and countries: I make up words until I find one that sounds good. You could also research what a certain word means in other languages, and use that word for your world, or you could look up baby names and get inspiration from those.

The last step to creating your world is adding your characters. Consider what country and city they currently live in and what kind of country they were born in. If you haven’t decided who your characters will be yet, check out my Character Chart Templates post.

Now congratulate yourself! You’ve finally finished making your fantasy world! I hope this post was helpful!

How to Create Relatable Characters in your Story

3 Ways to Create Suspense in your Story

How to Create Strong Villain Motivations for your Story

Quiz: What Kind of Mermaid Are You?